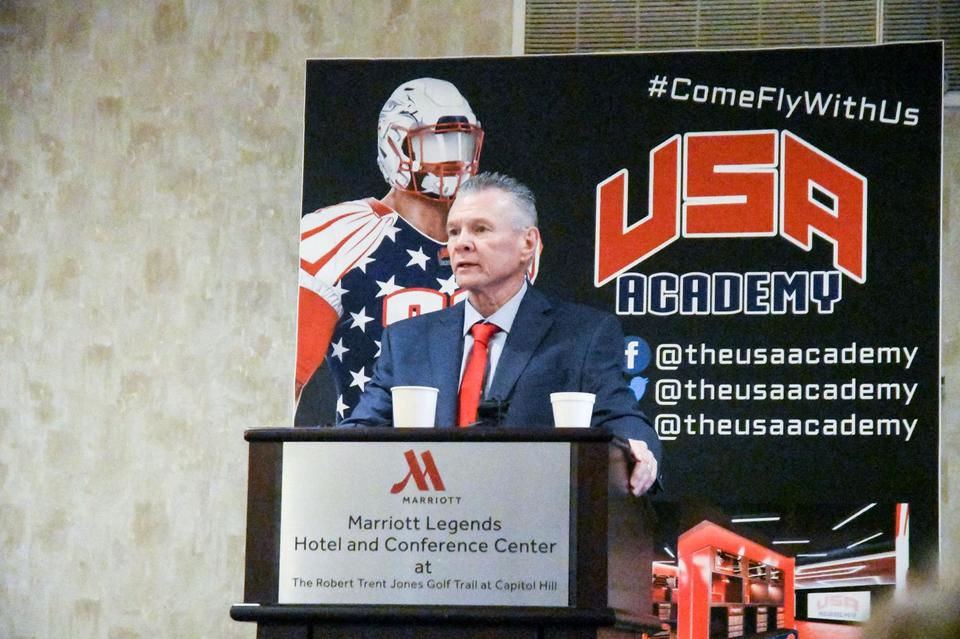 The Ultimate Student Athletes Academy, a new private school in Coosada, Alabama, couldn’t have started off with a bigger bang. At the two hour press conference at the Montgomery Mariott Prattville Hotel and Conference Center at Capital Hill in Prattville, founder Dusty DeVaughn introduced Rush Propst as the head coach for the school’s inaugural football team.

“We’re building a national brand,” Propst said. “We don’t want to be the best private school in just Alabama. I wouldn’t have done it for that.

“We want to play the best schools in the country and give our kids the opportunity to be successful.”

USA Academy will have a similar setup to IMG Academy in Bradenton, Florida. Propst and his staff will be able to recruit the top athletes from around the country to set up a national powerhouse football team like IMG. DeVaughn said they are in negotiations to play perennial powerhouses St. Frances (Md.) and St. John’s (DC) and would also like to negotiate a series of games with IMG.

“Everybody wants a shot at Rush Propst,” DeVaughn said.

USA Academy plans to build a new stadium and indoor practice facility, among other athletic facilities at its campus in Coosada. The price tag for facilities will be around $13-$14 million.

DeVaughn also said classes will be offered to athletes and non-athletes online and through traditional classroom setting. He said the highest tuition rate for athletes will be $13,750. He also said 386 players from 31 states had made contact with him and Propst as of Thursday morning.

Both DeVaughn and Propst are excited about the endeavor as a non-traditional school.

“I think this is an out-of-the-box-thinking situation, and that’s me,” Probst said. “That’s what I do. I love thinking outside the box. I’m not a traditionalist. I don’t do traditional things. I’ve always thought outside the box.”

The mission statement for the school is:

“Ultimate Student Athlete’s mission is to seek exceptionally promising student athletes of all backgrounds from across the nation and around the world and to educate them, through mental discipline, physical discipline and athletic experience. Our aim is to cultivate their creative, intellectual, moral, civic, and athletic capacities to beyond their own understandable limits, while putting them on a national stage to excel in their high school athletic experiences, while preparing them for the next stages of life in whatever God has planned.”